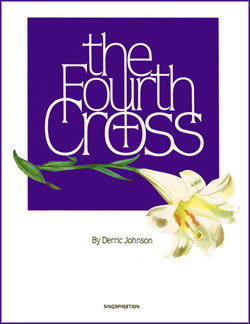 The Easter season holds thrilling memories for every believer, but to this one man this must have been especially true. We know that Jesus died for all the world, taking the place of every sinner on the cross; but literally He died in one man's place more than any other's.

It was that one man's cross that Jesus carried up the hill of Calvary. It was in his place that Jesus knew suffering, pain, and death. The cross on which Jesus died was intended for that other man... the man Barabbas who was in prison for crimes of insurrection and rebellion against the Roman Empire. At the instigation of the chief priests and elders the Jerusalem mob chose him in preference to Christ for release by Pilate at the Feast of Passover.

All of that is familiar history. The rest of the story must be imagined. In any case, THE FOURTH CROSS is the story that might have been.

This musical is very attainable for your adult SATB choir or ensemble and can be performed with piano, tracks, or orchestra.