All of the Complete Song Packages below include:

The players below feature listening tracks with the lead-in narration or dialog clipped to facilitate listening to the songs themselves. Purchasers of the complete musical (all songs) will receive both versions of the listening tracks -  one set complete with dialog and the other set with the dialog lead-ins clipped.

To purchase the entire One Solitary Life musical, see below individual songs.

For a limited time we're offering the full set of listening tracks from One Solitary Life for just $2.99!

This set has two parts: full tracks with narration/dialog & clipped tracks with songs only.

The New Joy to the World

Who is this Jesus? 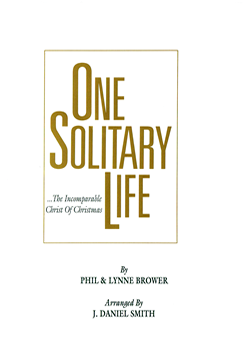 Description of One Solitary Life
- The Musical

"ONE SOLITARY LIFE"... Two thousand years ago, a Man was born contrary to the laws of nature. He was raised in obscurity yet reared in dignity... The child of a peasant woman and a carpenter man. He was neither wealthy nor influential, yet his humble birth threatened a mighty king. He had no formal education or training, yet as a man He astounded physicians and challenged the wisest of men. Today, He remains the central figure of human history, a timeless mystery of love.

Unlimited copies for purchaser's use!

Not Available for this Musical